So I have this thing anymore where I need to have 90% of my model WYSIWYG just so I can remember what the unit has.  For some units this is easy, Noise Marines for example, for other units like CSM with a mark and no icon it's a little more tough.  Now there are a few ways to mark a unit visually, paint is the most obvious and the easiest...

Can I do that?

Nope, not me apparently.

However I did think of way to mark a unit as having a specific Mark of Chaos... magnetize the head of the champion.  Since I like collecting fantasy Chaos kits for conversions I end up having a quite a few spare heads laying around.  Well, now they have a purpose. 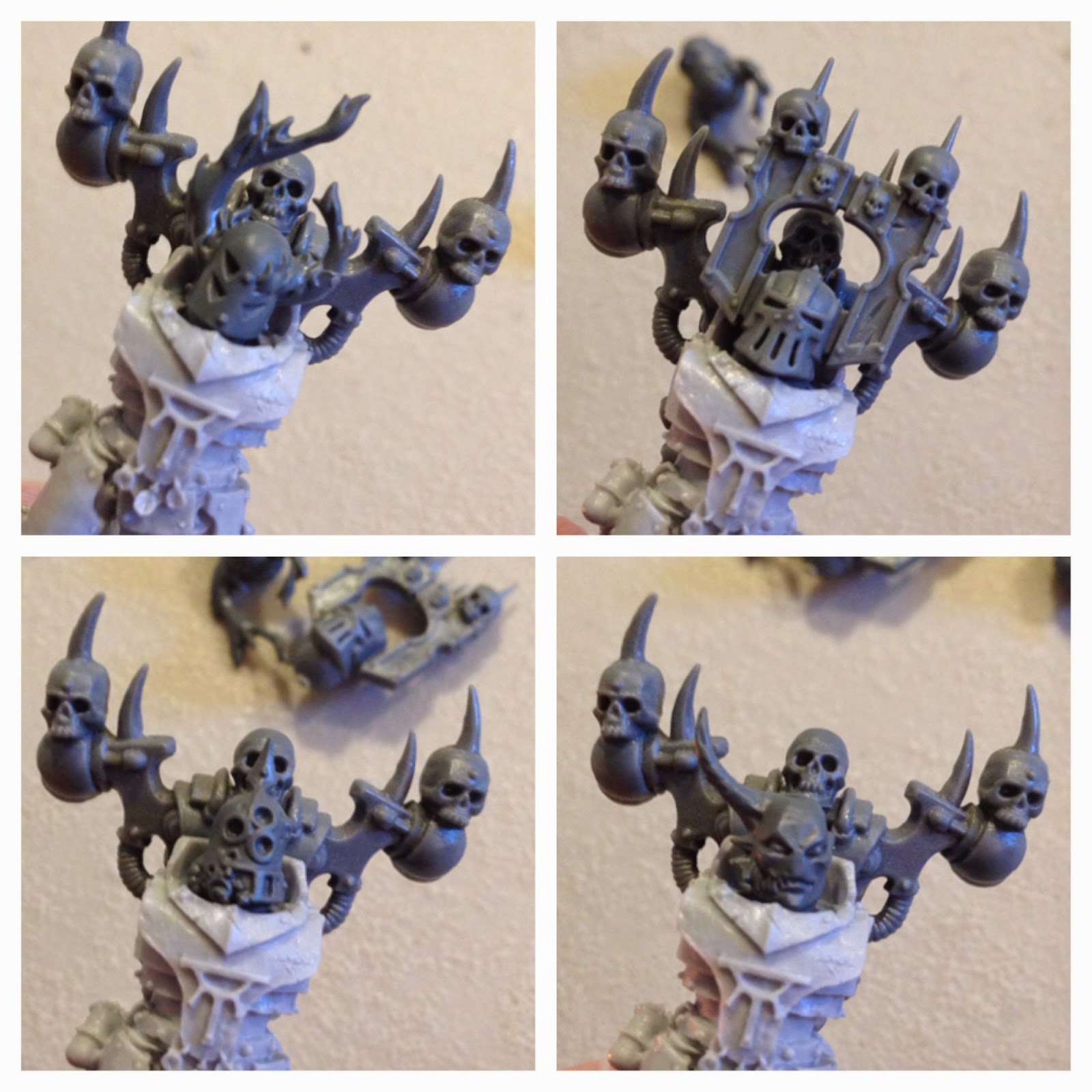 So what we have here is a Sons of Horus squad leader body from Forgeworld, with four different heads to show the mark for the unit.  The Tzeentch, Nurgle, and Slaanesh heads are from the fantasy Forsaken kit, while the Khorne head is from the Skullcrushers kit.  All this takes is 5 to 6 1/16" rare earth magnets, a 1/16" inch drill bit, superglue, and a permanent marker like a Sharpie.  Then you just follow along like so...

1.) Drill a small hole into the gorget area of the torso first and install your first magnet, you'll probably want something non-magnetic, like brass or plastic rod, to help push the magnet into the hole.  You want it to be flush with the cup of the neck socket/gorget, not buried under it.  These are tiny magnets and you want them to be close to each other to hold the head in place.

2.) Next find the polarity of a new magnet with magnet in the gorget... they'll stick, not push each other apart.  Now mark the surface of the side that connects with the gorget magnet with the permanent marker.  While that dries you can drill out the hole in the neck of the head.  Take your time here, it's probably also a good idea to dry fit the head to get en idea of where you want the magnet in the neck as this will determine the angle/pitch of the head and just like before you want it flush with the plastic, not buried in the neck.  I would also strongly recommend starting a pilot hole in the neck so the drill bit doesn't wander.

3.) Dab a little bit of superglue into the neck, take your marked magnet off the stack and then insert it into the hole... marker side out.  This why you marked it in the first place, so if you drop or fumble the magnet a bit... you will always know which side has the correct polarity.  Use a paper towel to shove the magnet as far into the hole as possible while twisting it to make sure the superglue doesn't stick to the paper towel and bingo... you just magnetized a head.

Repeat steps 1-3 for additional heads... or use slightly bigger magnets for other things like arms, or vehicle swap outs.

I like magnetizing certain units.  Units like Chosen, can be a pain to magnetize because they have so many options.  Same with Havocs.  Special weapons in most CSM unit?  Fine, it's only 2 models.  Same goes for Raptors, and Bikes to a certain extent.  Being able to configure a unit in several different ways really appeals to me, and it uses some of my bits in my bits box up at the same time.

*If anyone wants I can do some more photos of the process and edit this post for better visuals.*