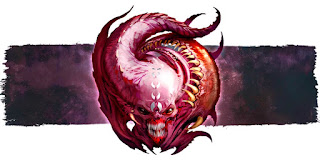 So I like to play a mix of shooty elements with some harder hitting assault units.  20 strong Chaos Cultists x 2 around a Dark Apostle with the Burning Brand of Skallathrax has been a favorite of mine since it could be a thing.  This tactic now works better with 30 strong units and Abaddon.  I also love some Khorne Berserkers, Warp Talons, Raptors, and even bikes to an extant but not as much as some other players.  Especially since only infantry can make it up different floors of a building, Raptors and Warp Talons are even more important I think.

What does this have to do with splitting my paint schemes you ask?

Well since 7th started the detachment craze and 8th doubled down on it I've decided I am going split my very large, and still mostly unpainted, Chaos force into separate Legions.  Black Legion for the shooty elements, Renegades/Emperor's Children for the close combat aspect*.  Renegades for the move/advance/charge and Emperor's Children for at the always strikes first in CC hilarity.  Some of the things you can combine with CSM Slaanesh marked sorcerers; such as Delightful Agonies - 5+FNP basically; and Slaanesh Demons loci/powers - Hysterical Frenzy for the extra "Fight phase" and the Loci for Emperor's Children demon units made me realize how flexible I could make my collection.  I also wanted something that could work with my Slaanesh Demons as well since this are the only demons I have.

The scheme I decided on for my Slaanesh based marines is The Flawless Host.  I looked for a long time for different Slaanesh war bands that were not based on a predominately black color scheme.  I wanted something that would offer a break from painting Black Legion, and even my Slaanesh Demons as well.  This did lead to some of the more strange paint schemes I've seen, a lot of images popped up from the 6th edition codex, and that the entire concept of not painting all the banding on CSM power armor metallic was a eye opening experience.  Now depending on what you read, and where you're reading it from, The Flawless Host has a couple of different paths.  One is the renegade chapter of Space Marines, the Shining Blades.  The other is an offshoot warband of the Emperor's Children that was entirely wiped out.  So either way I can make this work.

Now where to start? 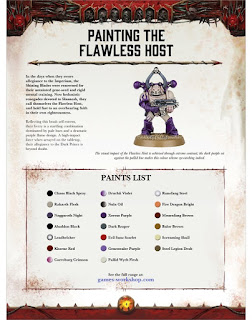 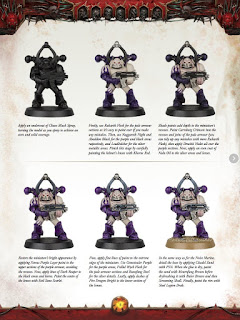 This where the Internet helped out.  So the image on the top popped up when I was initially searching for references, and I remembered this painting guide from back in the day.  WAY back in the day.  Or at least what feels way back.  The image on the bottom?  No where to be found, and finding this exact guide on Warhammer Digital's website and seeing it was "out of stock" was slightly defeating**.  So I turned to Twitter/The Warp, and put out the call for this long lost tome of knowledge.  The Abyss answered.  Someone had the exact page I needed and sent a screen cap.  Now it's not that I couldn't figure out how to paint it from the paint list alone, but knowing the actual order of operations helped a ton.  Now I could see it, and modify it where needed. 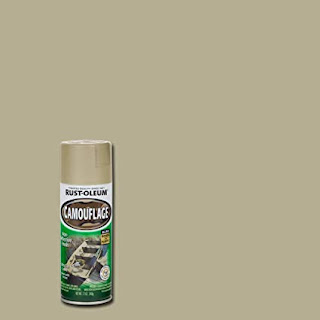 First step.  Find a better primer***.  I'm all for priming black, and have done this forever.  However it felt counter intuitive to prime a model such a dark color and then bring it back up to such a lighter color.  Unfortunately GW does not have a Rakarth Flesh primer can.  I would but all of them they did, since Rakarth is slowly becoming on of my favorite colors to work with.  Enter Rust-Oleum Specialty Camouflage spray paint.  It has a matte finish, and is one value darker then Rakarth flesh, AND is anywhere to ~$3.50-$5.99(~2.7-4.62GBP & ~3.09-5.28Euro).  It's so cheap.  Since I also live in an area of the United States where hunting is big, rural Ohio, it's also practically everywhere.  Like anything that isn't an actual primer, take it slow, and build up thin layers.  I've been able to prime Raptors with this, and haven't lost any of the detail.

That was the most significant change I've done to GW's process.  I pretty much follow the recipe and embellish it here and there.  I don't use black.  I only highlight armor plates to a lighter purple while leaving the banding the darker color.  I've added some small gold accents here and there.  All the small hoses are a brighter blue(Sotek Green, highlighted with Lothern Blue), and all cloth is pastel-ish green(Syabrite Green).  All leather bits are Vallejo Game Color Beastly Brown.  All armor joints, larger hoses, horns, and frag grenades are Eshin Grey.  Im trying to play up that aspect of Slaanesh with selective garish colors and bright metals while keep the rest of the model fairly neutral so those pastels pop.  The 2nd test model worked out well enough for me to move forward with priming the CC Raptor unit, Jump Pack Sorc, and Jump Pack Lord for this scheme.  To be honest the scheme has been a fun to figure out, and a little inspiring as well.  By inspiring I mean I want to paint now, which hasn't happened in awhile.

Here's the current order of operations, the Sybarite Green is not on there since I just added it to the scheme yesterday...  that being said, I have a tendency to jump all over a model and base coat and wash one section and then move a different part.  I'm just not a batch painter... maybe 3 models tops.  I realized this after the 2nd test model took about 6 hours to complete.  Granted some of that was problem solving, and further refining but still... 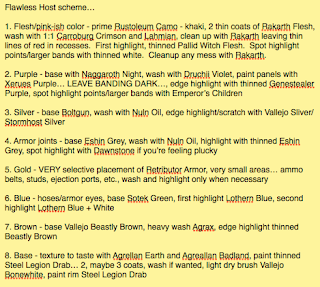 So heres the 1st test model.  Everything was really rough, mostly because I didn't have any smaller brushes than a medium layer, and didn't have my bifocals either. 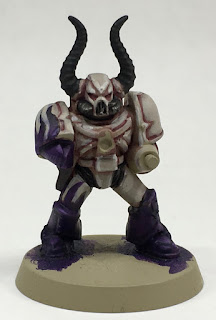 Heres the 2nd test model.  Now with smaller brushes and bifocals!  It came out well, and the flames came out really crisp, I'm actually quite happy with them.  Now I might try and use some more tribal inspired or hot rod inspired flames like I used to draw when I worked at the tattoo studio in my 20s.  I also freehanded the chapter symbol.  It wasn't a terrible experience, however I've already gotten the supplies needed to print out my own water slide transfers and just need to actually print them now.  That will be it's own adventure. 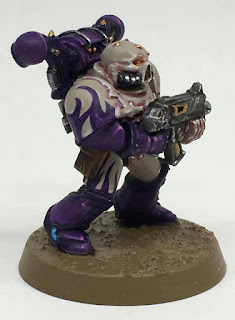 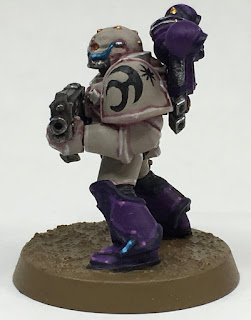 Here's the WIP magnetized Jump Lord, now with new Sybarite Green!  This also after about 4 hours, maybe 5 but it really only felt like 4 hours.  4 1/2?  Started at about 10am, went to GW around 12-12:15 had lunch and ordered Blackstone Fortress, went back and painted until about 5:30-6.  You know how it goes, as you do more of the thing the faster you get and the less you have to think about it.  You can also see the tonal difference between the primer and the Rakarth that I had mentioned earlier, since that is bare primer on the base. 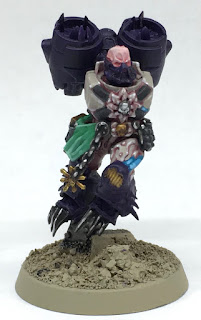 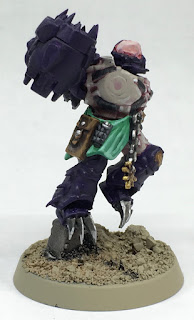 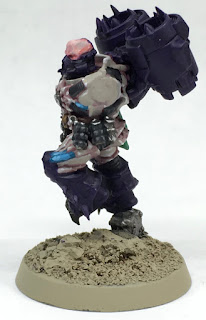 Right now I have him kitted out as a Lord(reroll 1s to hit), Renegade trait(advance then charge), Mark of Slaanesh, Lightning Claws(reroll wounds), Intoxicating Elixir(+1 Attack and 1+ Strength) Exalted Champion Warlord Trait(+1 attack)... so 6, Str 5 attacks at -2 AP, ideally buffed by a Sorcerer with Diabolic Strength(7 attacks at Strength 7), WHILE buffing a 10 man CC Raptor unit for the rerolls, AND that Raptor unit was buffed by Delightful Agonies(5+ FNP).  In my head this looks/performs awesome... but will probably be shot off the table/crippled before doing anything seriously fun. 😂  It has the whole "dangerous enough to be a threat and shouldn't be ignored" vibe going on, I would like to back this up with 2, 5 man Raptor squads with flamers, maybe a 6 strong bike squad too.  Which with this scheme... those might look fantastic.

Anyway, thanks for stopping by and if you have any questions let me know.

*I know, I know.. nothing beats World Eater Berserkers for total mulching of enemy units.  To be honest though, I'm kind of over them.
**I did contact them by email, and there was nothing they could do... understandable, it is an old guide... but how exactly does an digital item go out of stock?
*** I did try GW's Zandri Dust base spray... it was just way too yellow in tone and got too far away front the flesh tone of the armor that I currently like.