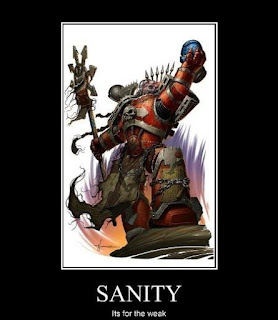 So, the one thing that I have noticed, along with everyone else, is how much GW is charging for it's plastic crack.  Now the design of these new models may be lacking a bit, but that doesn't mean you can't field a great looking force at a lower price. It just takes some thought and the right kit to make you go "Ahhhhhhh... that's the one!" (This was written before the Demon WD dropped showing some of the new demon models painted WWWWAAAAAAYYYY better than their leaked counterparts.  Is it a matter of the "leaked" pictures being the worst examples? So when we see more versions of those ugly models that the paint job can actually change how we look at them? Anyway...)  On a side note, doing these types of conversion can keep your force tourny legal if they have a minimum of GW parts needed... which to my knowledge was only the GW tournies so maybe it's not an issue anymore?  Please leave comments below if you know the answer to that!


For example, the Tyranid Warrior kit. This kit alone can give you several options from making your standard Warrior, to Hive Guard, Zoanthropes, and even Lictors. Considering those last 3 of that list are Finecast only, the price can add up quickly. Three Zoans are about $75, where as a box of Warriors are $47. To convert the Zoans you just use the left over Mawlock head plates from your Trygons... you do have a few Trygons right? 😜 A little bit of sprue for some filler, random bits box parts for the base, some green stuff to make the big brain, and there you go. A Zoan with minimal effort, and most of it you already had laying around in bits anyways. 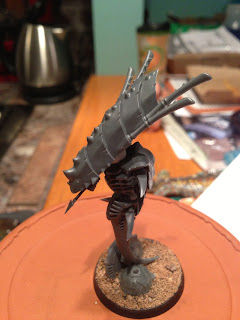 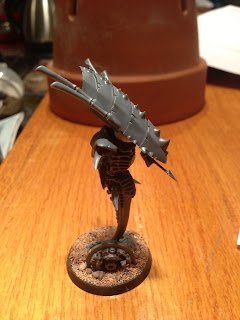 Hive Guard are another example... cut down the venom cannon, put on the rending claws, glue the armor piece to the carapace, and finally the only outside bit you need is a Hormagant head with a horn. Add some green stuff and your finished. 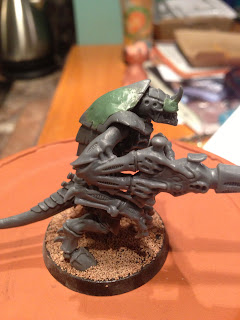 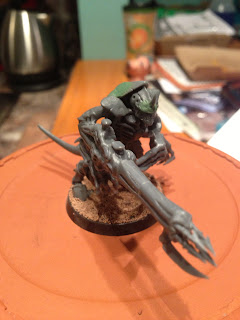 Both of these examples were found from Google searches, and the above is just my interpretation of those examples.  That's also kinda the point, people out there are finding ways to make great looking armies and sharing that information with the world.  Go look, try it out, and say thanks to them when you can.

Another example, Fiends of Slaanesh... I HATE those models. Hate them.  But, I think I found a usable workaround, especially since I'm trying to have some Demon Allies for my CSM. (This has stopped for the moment until I get the new Demon Codex) The Crypt Horror/Vargheist models are about twice the height of a Bloodletter, and fit very well on a 40mm round base. (Added bonus here are the wings from this kit, I'm using a pair to make my Parasite of Mortrex conversion) They too fit the 47:75 price ratio, and while we are at it...isn't $47 kind of an odd price? 😑 It's a very simple conversion as we're talking the crypt horror heads and arms on the vargheist body. Sorta spiky, and furry, reminiscent of Seekers in structure to a certain extent. In fact the paint job should translate well from Seekers since there are physical attributes that tie those models together as well. 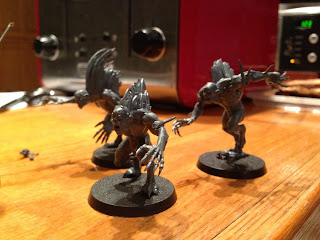 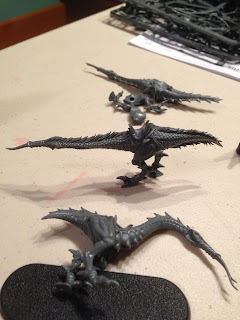 This especially works for me because of all of my Demonettes are now Demons of Slaanesh.  I originally converted them from Bloodletter bodies, arms, and heads with the horns clipped way down/off, and combined that with Demonette claws for the hands.  These were for my generic Lesser Demons from the last CSM codex. I didn't want the recognizable demons for my Lessers so I just had to convert them all... herp, then convert them again to make them still playable... that just involved ripping the old heads off (Khorne would be proud) and replacing them with Ghoul heads... derp.  Too much work?  Probably.  Upside is I have very unique Demon(ette)s that if I wanted another unit if Demonettes I would just use them straight out of the box AND have the benefit of visually telling them apart easily on the battlefield. 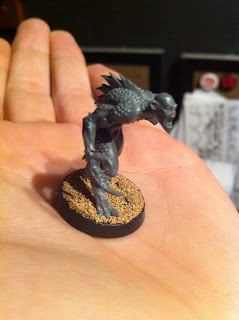 Another model I'm starting to find, or at least see, A TON other uses for is the Forgefiend. That ectoplasma cannon head thing is AWESOME. It came in real handy on a chopped down neck for my Heldrake as you can see here. 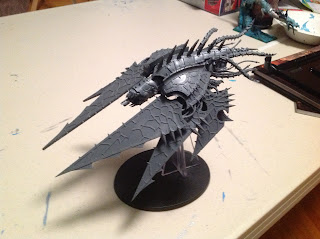 I have a feeling that the other cannons and any spare parts from this kit will come in handy when I attempt to make a Decimator from a Dreadknight kit. That will be a fun project.

All it takes for any of these is looking around and seeing what can try with what you have, or what can be had at a reasonable price.  The quality of kits coming  out does make this process easier as well.  With the erosion of metal models from GW, and the highly detailed plastic kits coming out... converting unique models from characters to troops has never been easier. In fact most of my inspiration for my Chaos Space Marines is actually coming from the Fantasy side of Warhammer right now, specifically the newer models from the Warriors of Chaos.  They have a baroque feel to them, and are just crying out to be released from the warp.  My converted Abaddon is a good example... 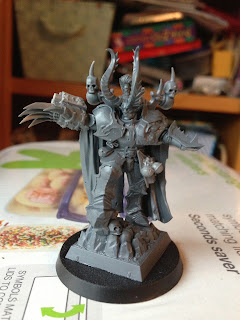 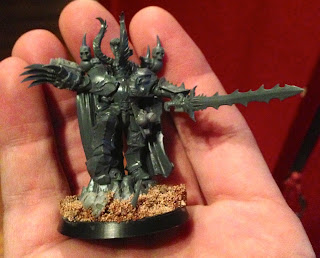 So he's almost completed, just some green stuff and guitar string and he'll be ready for paint.  Now I'm thinking about how to make Typhus, Huron, and Aharmin as well but not from standard space marine parts. 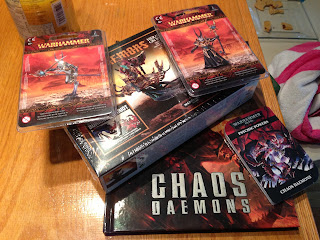 What are some of the things you've seen or even tried yourself?  Share below!!