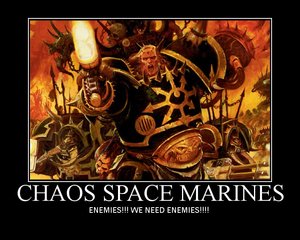 So a few weekends ago I had my first battle with the new Chaos 'Dex.  By the end of turn 5, I had an Obliterator and a Rhino left.  I got wasted!  But there a few caveats to this battle...

- It was only 1,000 points
- I was running what I had already built, and basing the points cost on current load outs
- I was also playing way more aggressively than I would normally (which is probably what cost me the battle)... I didn't really care about the objectives I wanted to see how my current army had changed.

A Lord with Termie Armor, combi-plasma, VoTLW, and The Black Mace attached to 5 Terminators with power axes, a heavy flamer, and VoTLW.

Now, contrasting this with my Nids, I'm on a new learning curve again.  I mean, I'm actually using vehicles where before I just popping them open.  Before I was running 4-5 T6 Monstrous Creatures(MCs), another 3-6 T6 Hive Guard, 20 Gants, and 3-6 Psykers with Biomancy.  The last version of my Nid list was really shooty and A LOT of T6 critters.  It was hard for my buddy to kill any of them, especially buffed up from Biomancy.  Add the ability to spawn more troops, what's there not to love?

Wow, Chaos has nothing like that.  I got spoiled.  Some sticking points from my first battle.  T5 Chaos Space Marines(CSM) are durable, but not awesome.  CSMs with the Mark of Khorne put out a punishing amount of attacks.  Havoc Launchers on Rhinos aren't worth the points.  Rhinos moving Flat Out are great.  Terminators need a Land Raider to be mobile on the battlefield, Deep Striking and standing there wastes time.  Rolling on the Boon Table is fun, and scary, but having Gift would've helped to buff some characters before the battle started.  One thing that really struck me was the speed of the Spawn, damn are they fast.

So that's that where I kinda want to go, a speedy list... well at least better mobility.  A rough list I'm thinking about is...

A Lord with Mark of Khorne (MoK), Axe of Blind Fury, Gift, and riding a Jugger.  He's joined by 5 bikes with MoK, Icon of Wrath, Meltagun, and Gift on the champ

1498 points with a model count of 72.  4 models with Gift rolls.  20 S7 shots and 2 S8 shots per turn at long range.  7 template weapons, one of which is Torrent and AP 3.  Not bad.  A touch light on the antitank.  It might be worth it to drop the Spawn and put some more melta into the list, or at least Missile Launchers... some type of S8 weapon.  But if I drop the Spawn then I lose my screen for the bikes and Lord.  Maybe squeeze some points out and replace the flamers in the CSM squad with meltaguns?

One thing that I noticed from the previous list was there was no target saturation.  I simply didn't have enough threats on the board, or I just didn't have anything my opponent read as  threatening.  This new list feels like I have enough threats to achieve that and some of those threats are FAST.  The idea is that my opponent wont be able to focus on the Lord unit, or the Dark Apostle blob, the Spawn, the CSMs, the Dreads, or the Havocs without something either getting to his line or hammering his line with firepower.

My regular gaming buddy and I usually play anywhere from 1500 to 1850 in points, with a good amount of them at 1750.  We have yet to play a 2000 point game, we are just too slow.  But now I'm kinda getting excited by having vehicles... or even Allies for that matter.  You know... the stuff I didn't have to worry about too much with my Nids.  Next game is this Saturday(11/24), I'll keep you posted with what worked and what was an utter failure.