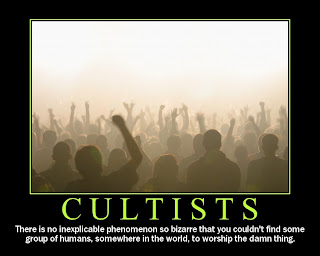 So this battle went better, and it was a closer game overall... after consolidating my cultist unit back onto an objective I won the game.  If I didn't do that, I would have lost the game.  I was getting carried away again and starting to forget the objectives... maybe Khorne is gnawing at my soul after all.

This list had multiple threats with fast units and hard hitting long range support.  I ran the list from the last post here, and at 1500 points you start to get an idea of what the Chaos 'Dex is capable of.  Then next gameday is a swap day, I'm getting most of my buddies Chaos stuff and he's getting a few boxes of mine that are just sitting around and collecting dust.  Above all else it felt good, and wasn't frustrating like trying to shoehorn my current models into a current 'Dex when they were designed for the old one.

Cultists with a Dark Apostle (DA) are amazing, a DA doesn't need anything beyond the Mark of Tzeentch, Spawn are highly annoying (both for myself and my opponent), Bikers are cool but how about more spawn?, auto-cannon Havocs put out a punishing number of shots, AP doesn't have to be an issue if you're putting out enough shots/hits in CC, 'Brutes are good mobile gun platforms, and giving champs and ICs Gift is a great way to start the battle. 2+ save on a Jugger Lord before the battle starts (that was a lucky roll)? Yes please. 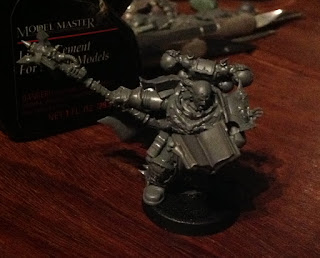 
Suffice it to say, I am loving the idea of a horde Chaos Space Marine army.  So much so I just got a lot off of eBay that comprised of 12 chosen, a lord, 10 auto-gun cultists, 10 auto-pistol &  ccw cultists, and a Hellbrute... all from the Dark Vengeance (DV) set. In addition, this lot also contained 5 oop metal Possessed, a Chaos Sorc, 3 bikes (still in boxes), 13 Berserkers, and a spawn. All of that for $40 less than a CSM battleforce.  Add to that my own DV set of Chaos, and that I traded all my Dark Angel models for my buddies Chaos models out of his DV set.  For even further chaos madness, remember that I still have 2 10 man squads of CSM, a 10 man Berserker squad, 5 Termies, a Termie lord, 2 auto/las Predators, 2 converted Oblits, 24 lesser demons (converted), a greater demon (also converted), and I believe a metric ton of spare bits.  I might have just crossed the 3000 point barrier. 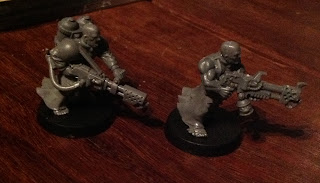 I will have A LOT of painting to do but I also have been considering switching the army to... Black Legion. So that might help with the speed of painting, although with how fast I paint normally, maybe not.  Black, gold, and silver for the general scheme with red accents.  Plus I can use the scheme I developed for my mutants in my now defunct Lost and the Damned army for my cultists, which was black, brown, and silver.  A dark cloud of bodies marching across the field, sowing death and destruction for the Gods by any means necessary.  Painting the force Black Legion will also give me a nice contrast to painting my Tyrainds.  So painting either force shouldn't get to old and at the very least give me the opportunity to bounce back and forth between them when one does get stale from painting.

Some of this is me trying to embrace the new 'Dex to its fullest, by using as many marks and/or icons as possible and not being restrictive in my list building anymore.  Some of this is also feeling like there is no real benefit to running an undivided force without specific marks or icons.  That the aspect of chaos undivided now is to have at least one mark per god in your army... and that is simply not the how I see the Word Bearers. 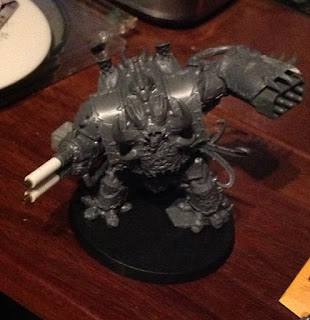 The next game is settled at 1850 points.  My buddy is running 'Wolves so there is a lot that can bring the hurt in his list.  That's ok... like Tyler says "I want you to hit me as hard as you can..."

It will be an interesting battle, especially since I want to bring demons into the mix.  Demonettes to be specific, as of now Slaanesh is the only mark/icon I'm not running so he's up next.  I haven't had a chance to use the Allies Chart yet and the whole prospect sounds exciting.  Deepstriking demons into his line will only add more pressure than I'm already applying.  Tweak some points to make sure I can break open a Land Raider and we have a winner.  Maybe :-)  Next post will deal with the "improved" list and how it performed.