Longing for the good 'ol days... 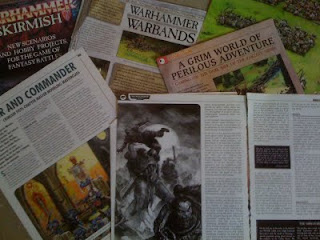 So, watching the hobby change over the years the one thing I wish would go back to the way it was would be White Dwarf. The current incarnation of the mag seems to be nothing but shameless self promotion, yeah yeah I know it's been this way for awhile (and personally I see Andy Chambers departure as the downfall of the golden age )but really... when was the last time you were excited to read a White dwarf?
That's what I mean by longing for good 'ol days... the return of a magazine for gamers by gamers. The articles above were all collected over time from several different issues, they just rocked so hard that I had to keep them. The last WD I bought was the Space Wolf one, primarily cause I used to collect Wolves, but even that was disappointing.
So, in the face of mediocrity I get most of my info and cool hobby tips from my fellow bloggers. It seems the wealth of knowledge and creativity that inspires me now is from the community at large and I think it's a shift in the right direction... not turning away from GW per se, but using the the foundation they provide to really get excited by projects that other people are doing across the world. So is it the same for you guys and gals? Are you disappointed with WD as well? Or, do you think it's still a good mag? How about this one... are you finding more info online than anywhere else at the moment? Is it blogs? E-zines? Both?
What started this whole conversation was the WD review I saw over at Hogs of War, what struck me was this... "A better issue would have migrated to the night stand for me before bed", and that got me thinking. I't's been ages since any WD like that has come along, for me at least.
Grim
Posted by Chris at 7:01 PM
Email ThisBlogThis!Share to TwitterShare to FacebookShare to Pinterest
Labels: Conversation