The previous article dealt with what I had been working on for a while, these next few articles will detail some of projects more in concept and execution.


So, it is an established fact that I love converting.  This is a pretty safe statement.  I think I actually like it more than the painting because it's more of a challenge to me.  If it doesn't look right to begin with, no amount of paint is going to fix it.  Like any other canvas... it needs to be put together well, primed, and then finally painted upon.  Which got me thinking about some of the other choices in the Chaos 'Dex, and how I would go about incorporating them into my own force.

This all started with the Warpsmith.  It has spread to other types of models as well.  I remember the War Smiths for Iron Warriors and the Dark Apostles for Word Bearers and their rules to their respective factions.  Fast forward to today.  Now I get the design ideal that Chaos is moving toward, or has moved toward, mixed units/cults per warband.  I just don't agree with them(GW) too much in regards to some of the characters... like the Warpsmith and Dark Apostle.  These, I feel, should have been left for an appropriate Supplement/Dataslate and not shoe horned into the main book.  But here they are!  So how do I make them fit into my force?  Why convert them of course!

To be very honest I really love the idea of the Warpsmith.  Who doesn't love BS 5 on ANY gun, or the Eye of Night from the Black Legion supplement, no one that's who!  I just hate the model, and not because of it's design but because of its material.  I'd rather jam a hot poker someplace than try and work with that stuff again.  I don't like the springy nature of Finecast, the mix has sometimes been to brittle so finer pieces has snapped as well... just from cleaning before assembly.  I've had enough negative experiences to outweigh the good ones.  So there were some things that had to be in place before starting my Warpsmith...

1. Needs to be plastic.  Just because it's such a nice material to work with, it's durable, temperature resistant, did I mention it's nice to work with?  ;-)

2. How about NOT a marine?  I have seen some very cool Warpsmith conversions using several different types of Chaos Marines, but then this little memory came bubbling to the surface.  The Dark Mechanicus.  Now if you think there are a lot of Warpsmith conversion, which there are, try Googling "dark mechanicus conversions".  There is some wicked stuff out there, and people using all sorts of bits from all sorts of kits.  The community, as always, has been very inspirational.

3. Since it wasn't going to be a marine, it was sorta scary.  It was a big jump for me to go from the bulky, 2-3 ton killing machines to something more foreign.  Not only in design, but in construction as well. 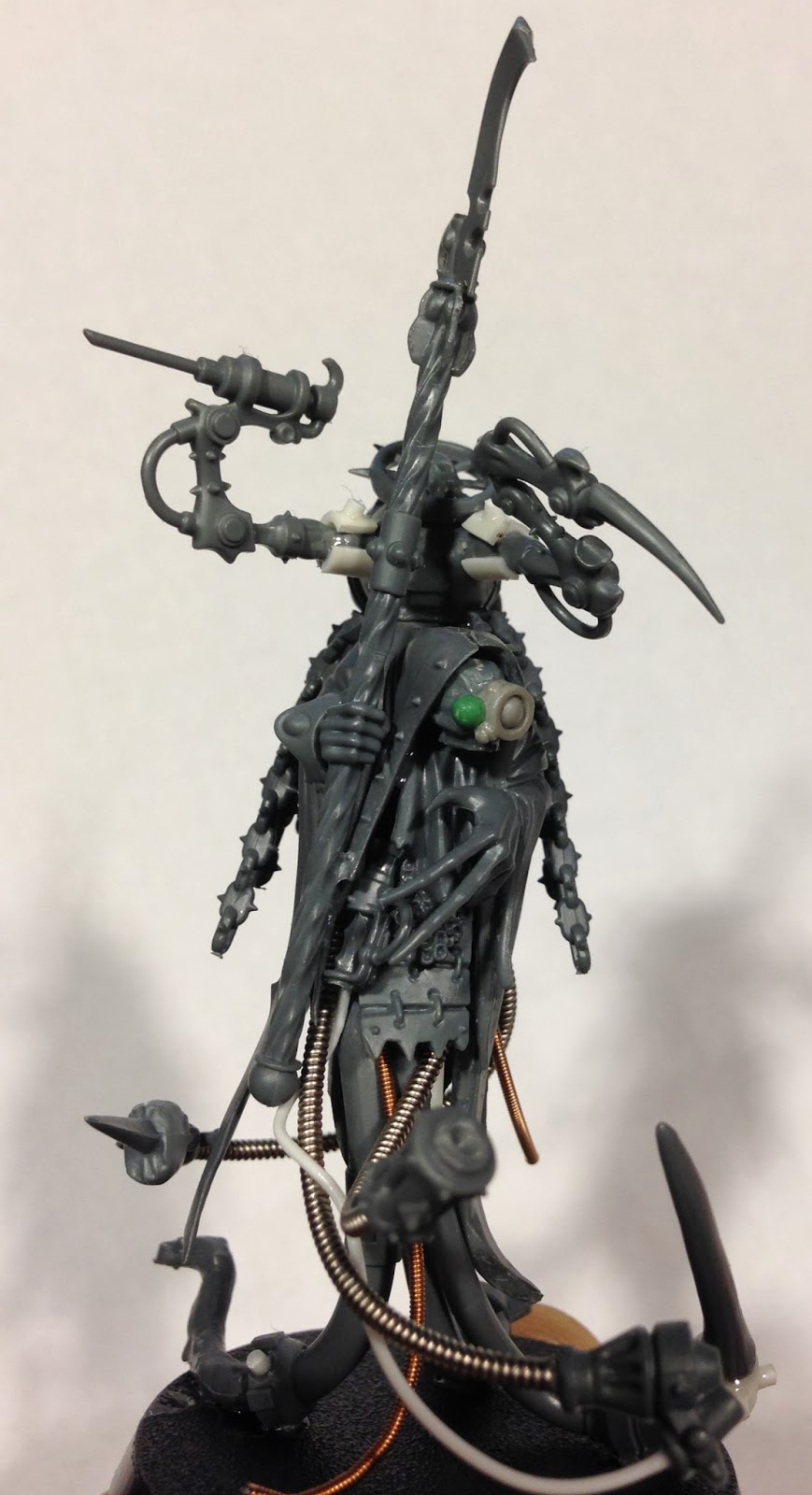 So there was a lot of sitting there, picking up bits and holding them in place, with some "oh no way.." or "yes, that's it!"  It took 3-4 hours to build.  As always, lately, it was from the bits box with some plastic tubing and guitar string for hoses.  But as I get older, I did just turn 41, I need to have the standard gear on the model.  It is WYSIWYG but for me that's a necessity so I can remember what the damn thing does!  So you can see the meltagun nozzle, the flamer tip, the power axe, the tentacles for the mechatendrils as well.  The only thing not directly modeled is the bolt pistol.  Now, it does stand a little on the tall side as it's *almost* as tall as a stock Demon Prince.  It is also on a 40mm base, since there was no way is was going to sit on a 25mm base.  So it's a bigger target, with 2+... ok, I'll deal because of the rule of cool.  Which, seems to be driving force behind most of my conversions or armies for that matter.

Anyway, that is my Warpsmith.  This will continue with the Dark Apostle, Cypher, Be'lakor, the rest of the CSM super friends ... Typhus, Ahriman, Lucius, Fabius, Huron, and Kharn will all get the same type of treatment eventually.

The Dark Apostle will be an interesting challenge as well, I want to try and make it like the Discords from the Word Bearer Ominbus from Anthony Reynolds.  When I say "make it like", I mean inspired by to a certain extent.  A floating speaker grille with tentacles is the base.  The tricky part is in the crozius and bolt pistol, how to put them into the overall design of the model and make it look like that's how it's supposed to be.

Anyway, that will be up soon, and I'll also post the failure for the first try.
Posted by Chris at 11:42 PM
Email ThisBlogThis!Share to TwitterShare to FacebookShare to Pinterest
Labels: Black Legion, Chaos, Concept, Conversion, Kit Bash