So it's been awhile and it's mostly from life stuff cutting into the majority of my time.  The job has kicked up a few notches mostly from a colleague and dear friend passing away last October.  So, to say I've been busy would be an understatement.  Running a glass studio is like owning a house, there's usually something wrong or you're just generally keeping it clean.  Imagine your house with 40 kids/young adults... and the house is on fire... you get the picture.

However, I was always making some time for the hobby mostly as a way to keep me grounded through out the entire affair.  This involved a lot of building and some painting, but mostly building.  There was a lot of progress made on certain projects, new ones started, painting recipes tried out, and many; maybe too many; purchases. 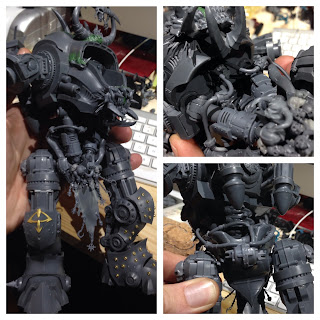 The Leviathan Knight project is still alive and well.  However due to the size of the 25mm kit I have decided to "upgrade" it to a Kytan demon-engine.  This makes more sense for the scale of the beast and the torso and legs are attached and super glued in place as one unit now.  So really there's mainly finishing/detail work on connections and the like.  Hose connections, more wires, and many more skulls need to be added.  Additionally the right pauldron will need to be studded to match the lower left leg armor.  The middle has been bulked out so it looks less flimsy and more sturdy.  To go with this kit I picked up a pair of Mauler Claws for a house-ruled, non-gun version at some point.  It's a little pricey at 525 points but it is something you don't want getting to your line an making a mess.

I really enjoy the look of theLeviathan kit.  To me, it looked superior in every way to the Imperial Knight. I'm not knocking GW's kit, my buddy has two and they are nice, it just never really appealed to me.  That being said, I did go ahead and order a Mortis Leviathan for a Knight conversion.  It is a little smaller but with some smart bit swaps I think I can bulk it out reasonably well.  For example using the GW Knight legs but the Leviathan feet should give it an almost Chaos Raptor like appearance.  The 15 mm scale is a little intimidating just because everything is so small but I think it is more than doable.  I also plan on using plastic tubing to bulk out the middle and hips, iron work from the Chaos Warshirne kit for the shoulders and some Mechanicum bits for a more arcane feel overall.  The idea is to make a Knight cheaper than the FW model with select replacements and bits box rummaging.  It should be fun, and I'll probably start that this weekend.

A recent purchase was the Chaos Rapier Platforms from The Dark Works.  This gentleman does stellar work and they ship with magnets so you can change the guns out for any load out you want.  Currently, he only has the conversion beamer(sold out) and ecto-plasma cannons but the auto cannon  option should be coming soon.  They look the part without any conversion work, which is fabulous.

I also backed The Others:7 Sins on Kickstarter as way to bolster my demon models and cultists/renegades.  At the time of this writing I believe they are still doing late pledges so don't wait too long or the pledge manager will be launched effectively closing any buying.  The amount of miniatures you get for $100 US is simply staggering.  They are at 30mm scale so a little bigger than but it shouldn't be too noticeable.  Some of the add-ons are fantastic as well, check out the Apocalypse box for Demon Prince proxies and you'll see what I mean.  The various other team boxes could be the basis for Inquisitor war bands as well.  All around a super value for the money.

Well over a year in the waiting, the Creature Caster KS is finally gearing up for production and those demon miniatures are fantastic.  If you haven't seen them yet you should really go over and take a look.  The length of the wait is annoying but they will get to me eventually and I have enough keeping me busy until they show up.  Which, once they do will put me at A LOT of Greater Demons counting the 4 models I got from Mierce Miniatures this summer as well.

On the Forgeworld front, my buddy and I took advantage of the free shipping promo and I got the 40k Nurgle Sorcerer, Kor Pharon, and Erebus.  I'm still figuring out what to do with Kor Pharon but Erebus is a stunning model and I have plans to turn him into the ultimate Dark Apostle.  That Nurgle Sorcerer just needs a Palanquin and he will be all set.  If you have the chance sometime I highly recommend a level 3 Nurgle Sorcerer on a Palanquin rolling on Biomancy with a demon weapon.  He can become an untouchable killing machine, yes it's dependent on good Biomancy rolls but if you get them... heads WILL roll. 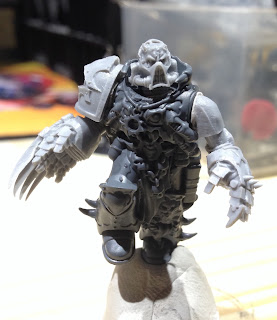 Using FW's lovely legion bits, I was also able to convert the CSM plastic champ and magnetize him with almost all the options.  Super pleased with the whole mini, need to get him primed soon since we have a break in the weather this week.  Again, the dremel made hollowing out the collar super easy for the resin head to fit.  That thing has a made a bunch of modeling projects way easier.

For a side project I've started an Inquisitor Warband and have a ton of fun converting a rag tag group of ImperiL lap dogs.

As far as painting goes, I think I've finally found a way to paint my Black Legion well and quickly.  This isn't my recipe, I found it online poking around B&C and was pointed here, but it works wonderfully.  Super easy to do too!  The general recipe is as follows...

This is general recipe which get them painted quickly.  It works really well for the Dark Vengeance Chosen so the "normal" CSM go even faster.  Then all the details, eyes and hoses in red, loin cloths in brown for leather, edge highlight armor plates with Incubi Darkness and then base. 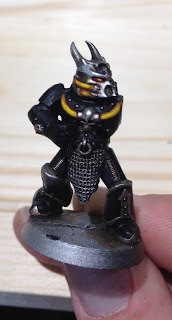 The back-fill technique in full effect on a test mini

So a very sort of up and down summer as it were, but it feels good to be back, talk to you soon.