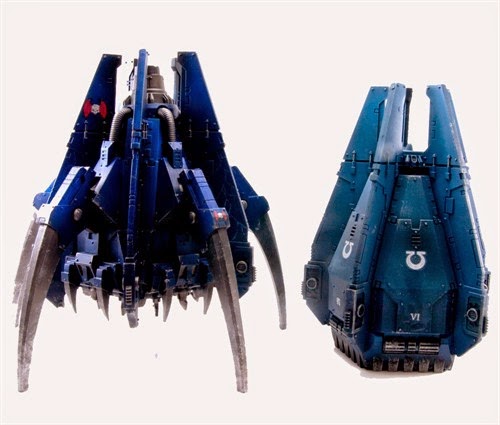 Well, what about those Dreadclaws?!  Seriously, an assault craft that is a dedicated transport for CSM or Chosen?  Sign.  Me.  Up.  This little baby gives me some flexibility on the battlefield while not competing for those all important Fast Attack slots... if those are really even a thing anymore.  Anyway... liking the rules, loving the concept, and not to happy with the FW pricing.  At 57 Pounds Sterling, that's ~$88 before the shipping.  Now I do love FW, I did get the collectors edition of IA:13, but thats a lot for something slightly larger than a normal stock GW Drop Pod.  So... I go looking for "dreadclaw conversion" and find this nifty article over at Dark Future Games that pretty much summed up what I wanted.  Exactly.  Their tutorial is spot on, and a fantastic start.  For my own Dreadclaw I pretty much followed it to the letter, but then I started looking at the all the other conversions as well.  They were all pretty much the same.  Make the pod, flip the fins.  Except I don't like how the fins look after they get flipped.  The fins look to splayed out, like they buckled a bit when they made impact and thats why they look a little "splayed".  Well, how could I change that and make a bunch of extra work in the process?  Simple!  Try and find the correct angle to flip the tips inward to look more like the Dreadclaw.  I think I got it to work out pretty well, let me know what you think. 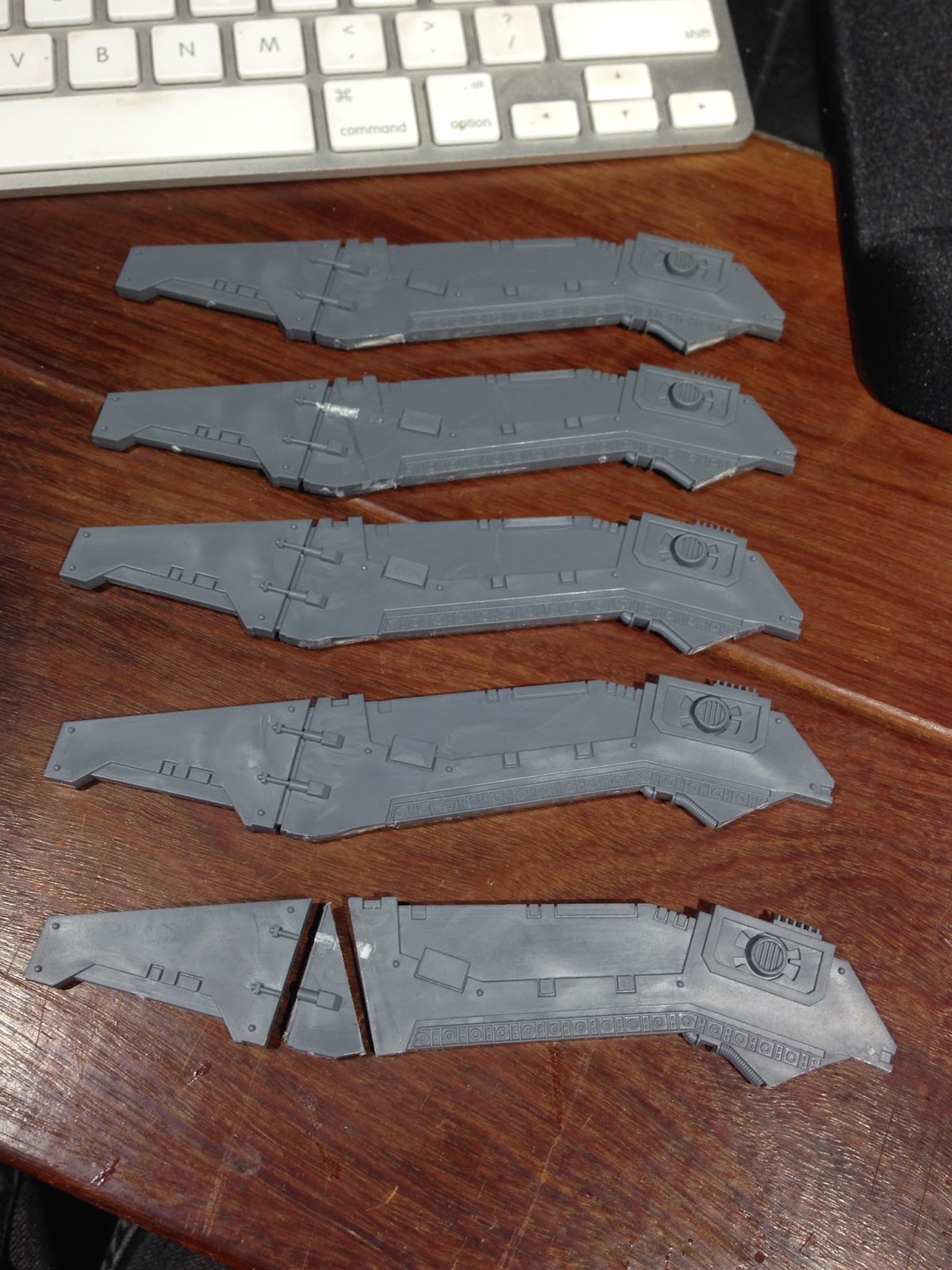 Basically follow Dark Future Gaming's tut for the main hull assembly, and where to clip the fins initially.  After that, you're done.  Prime and paint!  It doesn't look bad at all really.  However, if you want to spice it up a bit... then please continue on. 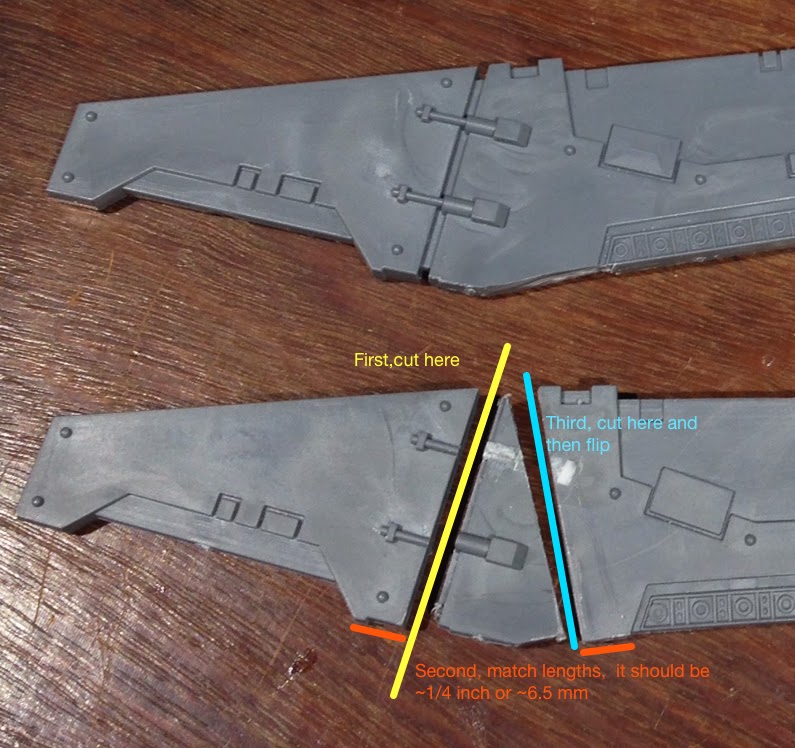 So what it really comes down to is two cuts, sawing actually, and some spacing material.  Old sprue could do it as well, I just happen to have some plasticard from ancient days around to chop up.  Start with the yellow line first in the photo above.  Use the orange area of the stabilizer tip to find the approximate length you will need to for the end of the second cut.  Finally follow the blue line to make the second cut.  You may want to trim some of the servo arms for the fin off to make sawing easier.  Repeat x 5. 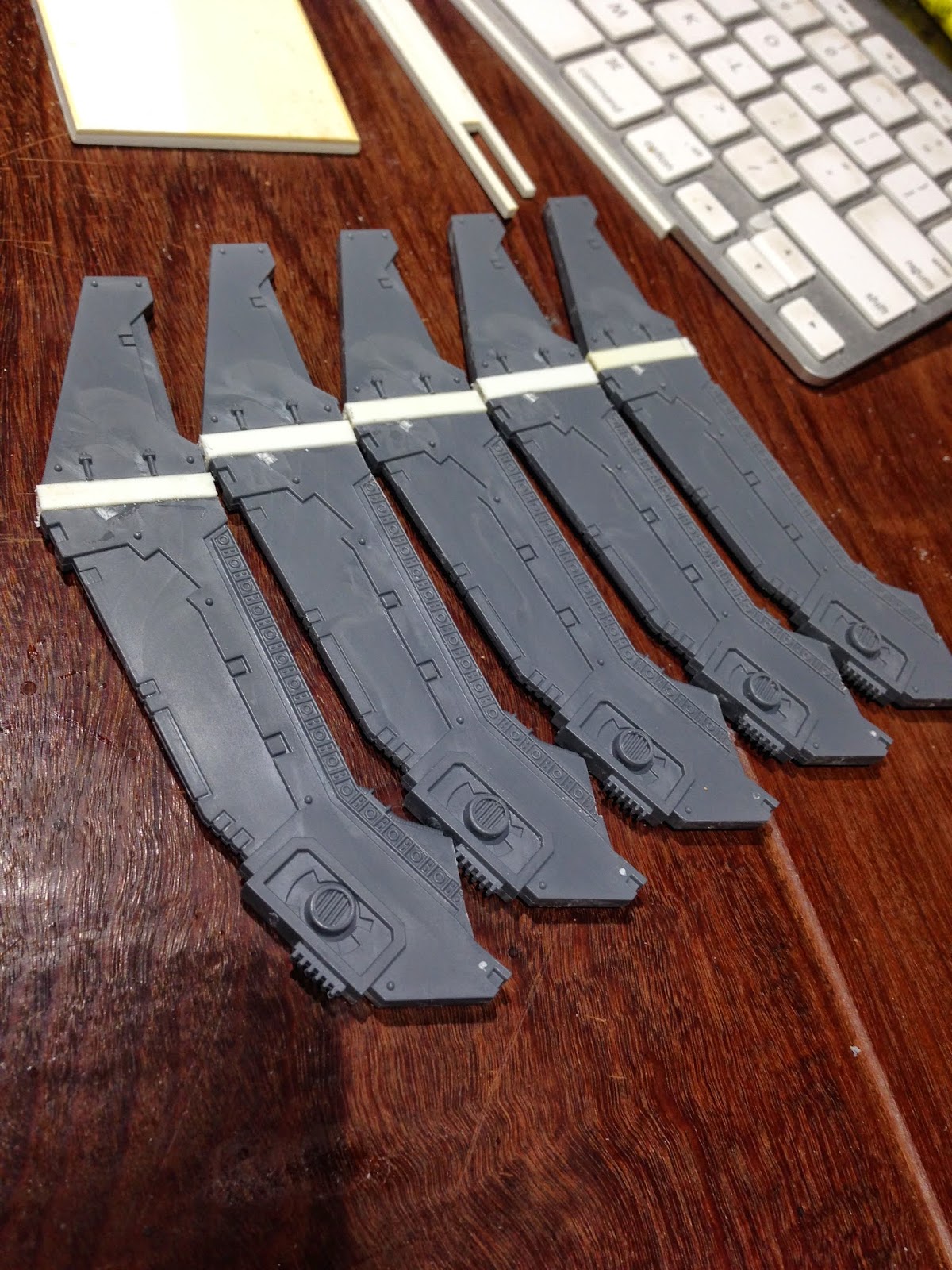 Then all you have to do is flip the stabilizer tip and glue.  Again, if you wanted to, you could stop right here and call it a day.  I added some spacing to help raise the whole pod a bit, and I even added tips from the "dozer" blade on the CSM Vehicle Sprue to jack it up a little more.  I wanted infantry models to be able to fit underneath it, so I needed it to be taller. 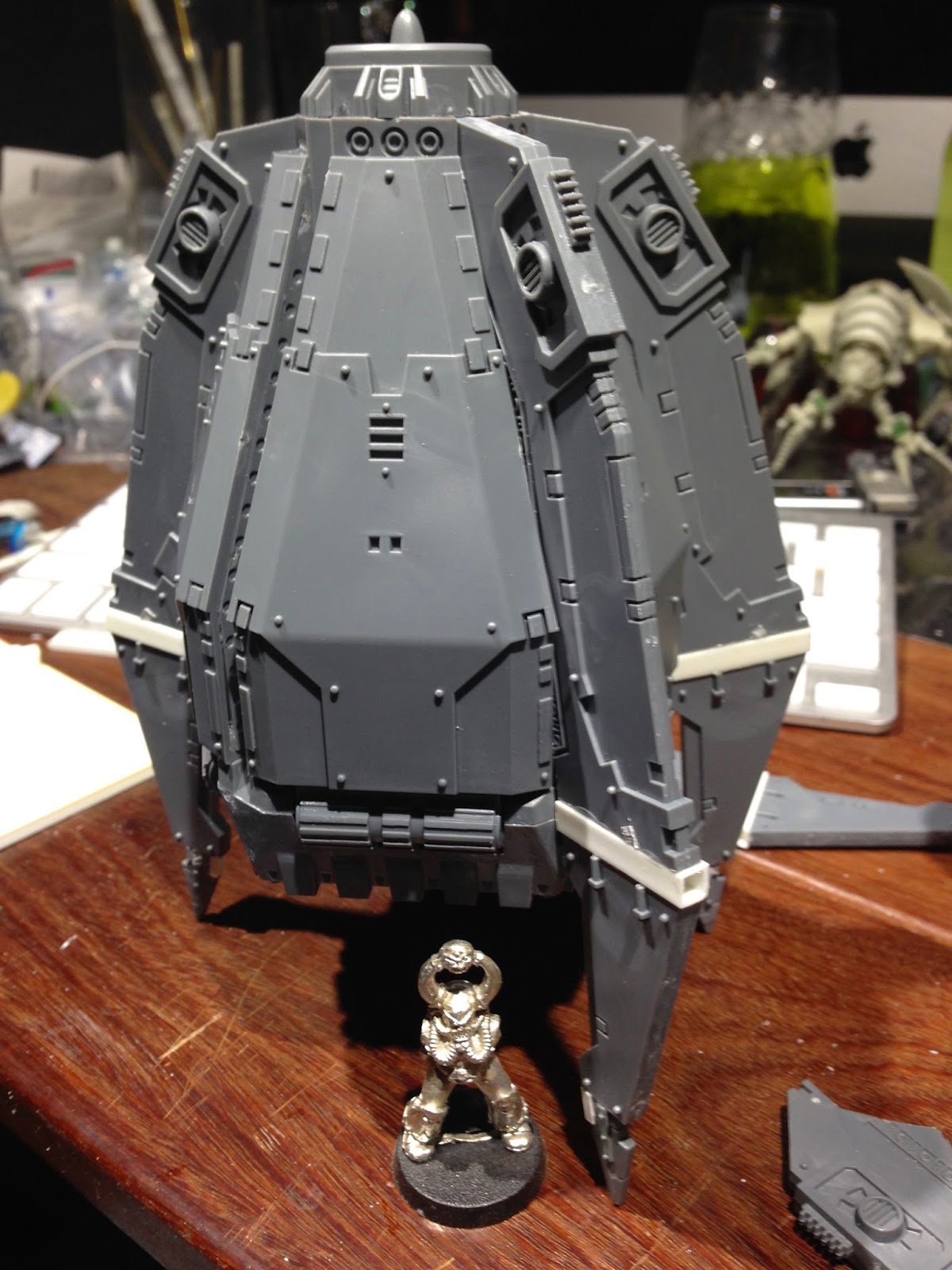 So there we have it.  This, to me, feels more like a Dreadclaw and I'm waiting on some bits to come to finish it up.  There's only a few more things to get planned out.  Adding some more stabilizer fins back to the top, and how to do the flying stand for it as well. 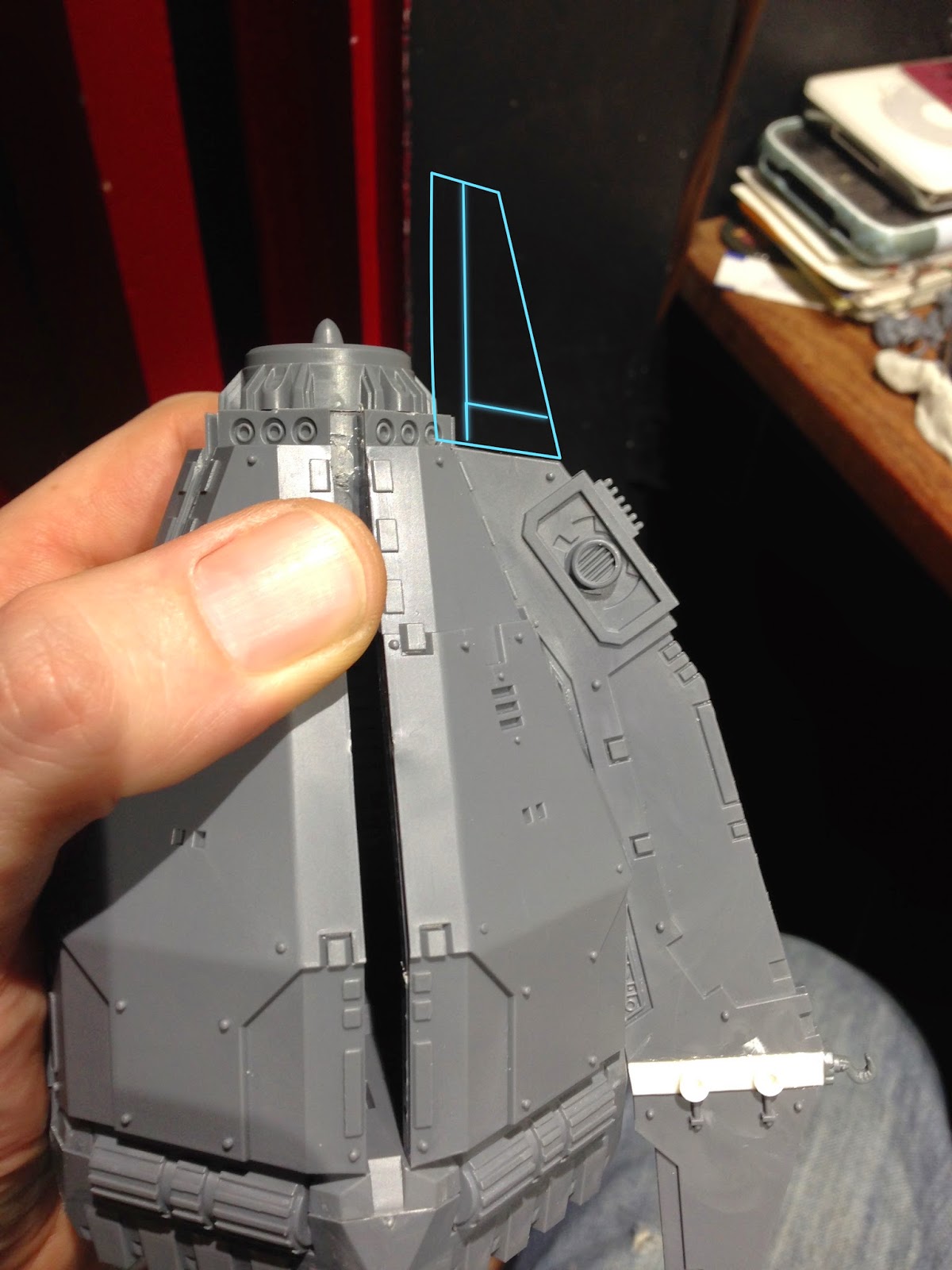 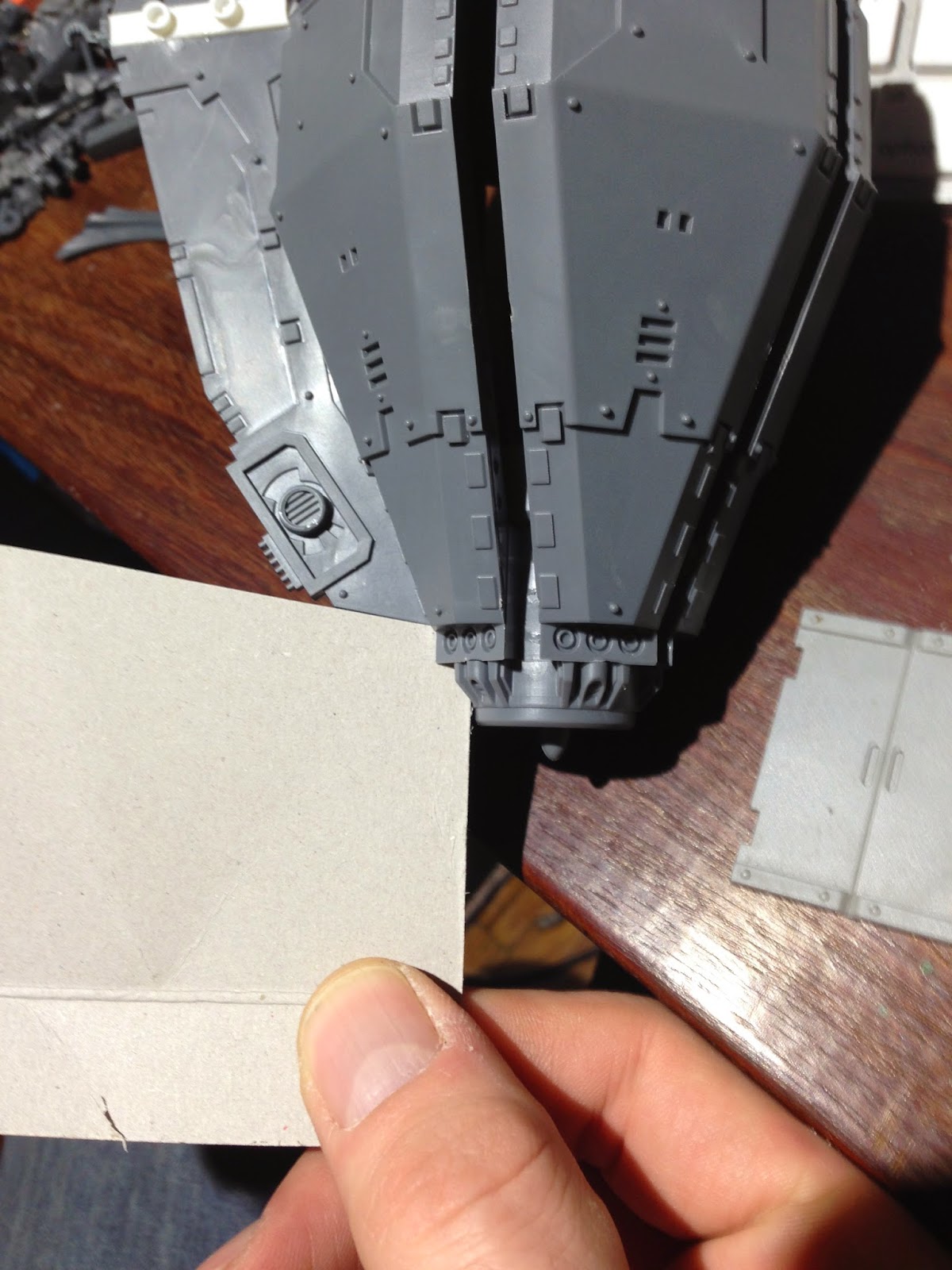 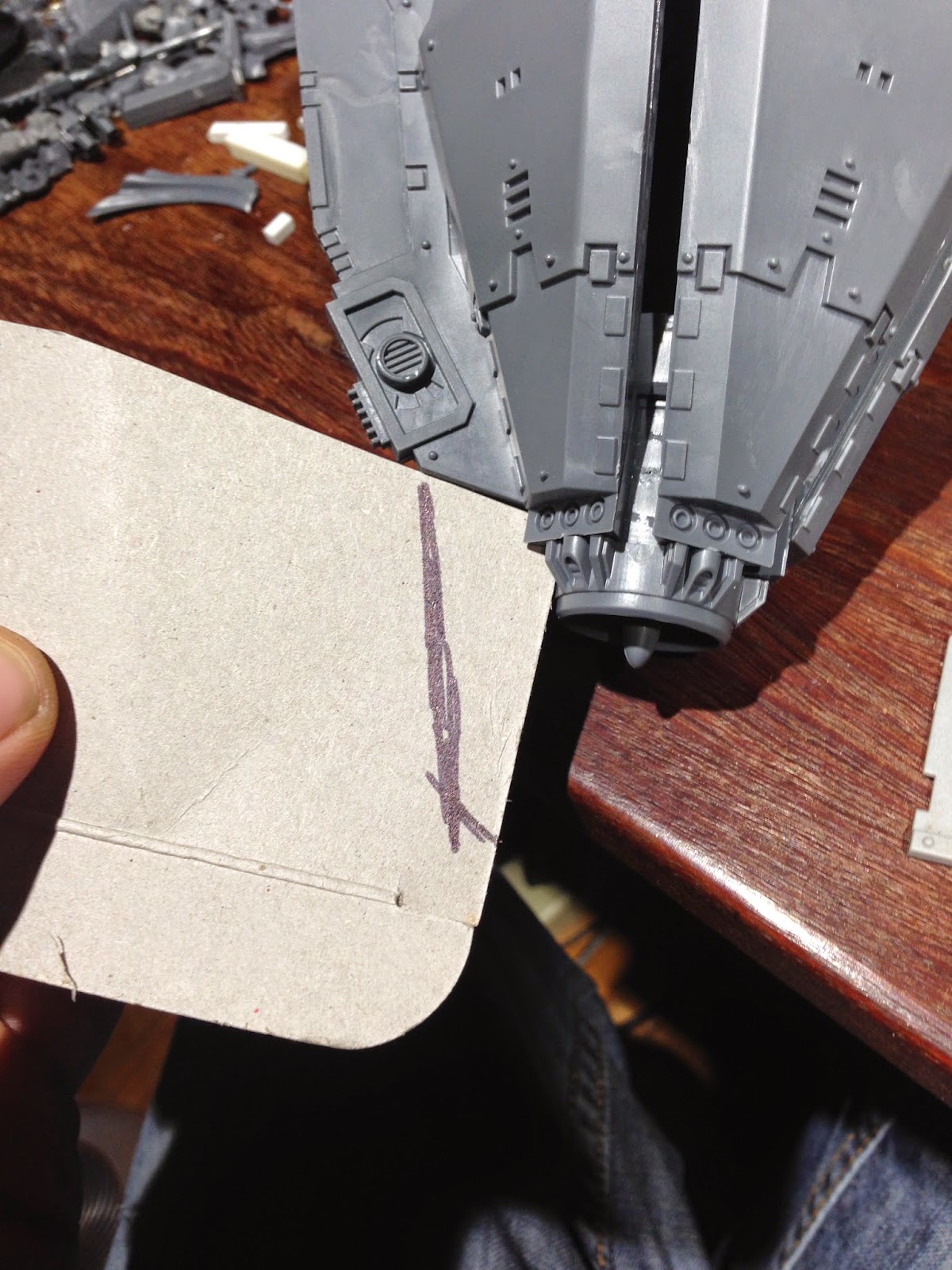 So here's the Photoshop mock up, and then the actual template for the construction of the top stabilizer fins.

All in all, this has been a fun project and I *might* do another one.  My personal philosophy is that one might be good but a pair is better, but that's not always the case.  One of the best unit analysis posts for the Dreadclaw is here.  It's especially malisteen's post, #16, that really lays it out to not think of the Dreadclaw as a drop pod but more like a stripped down Storm Raven.  Great post.

That's it for now until those bits get here and I have a chance to wrap this project up and put it on the very large "to paint" shelf.