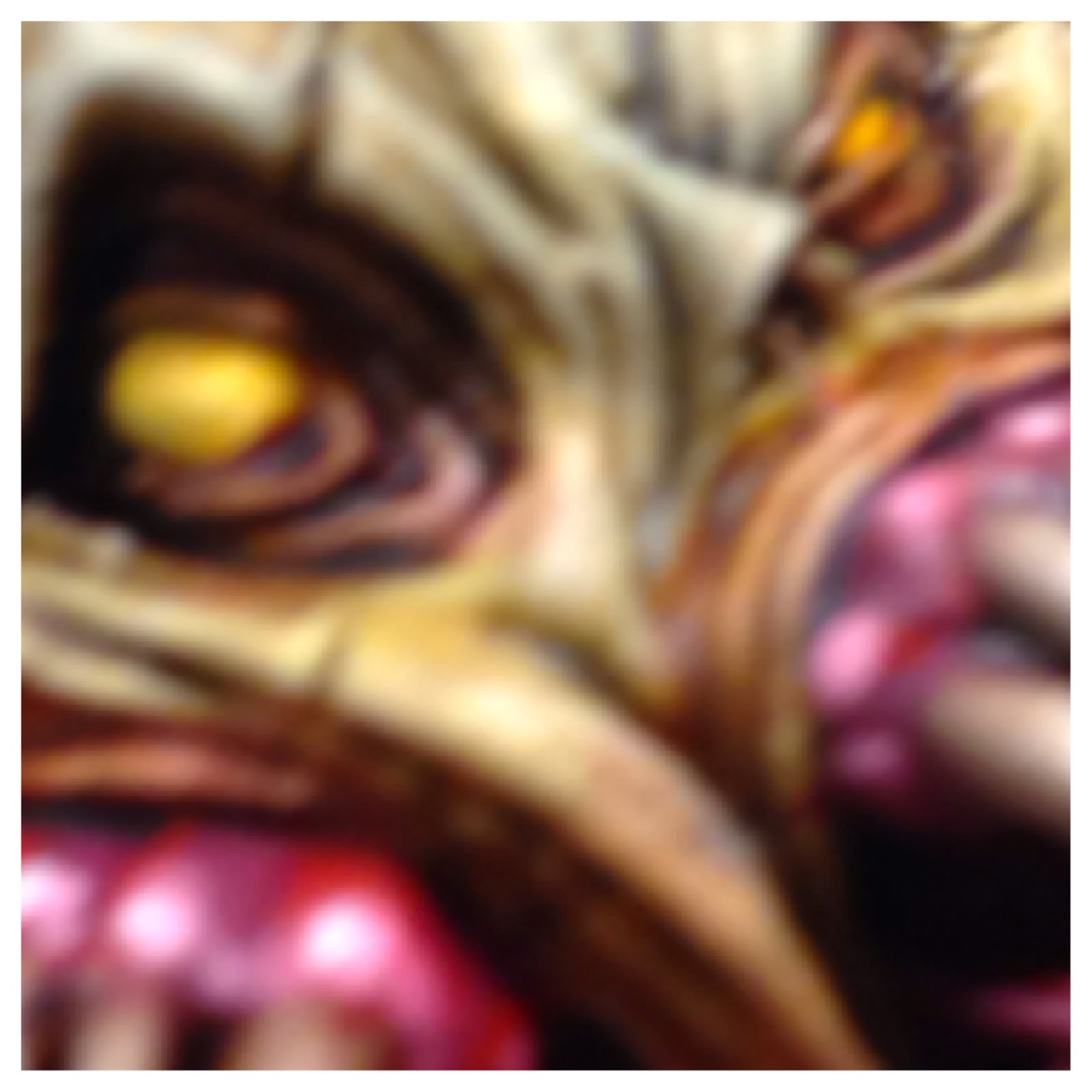 So I did manage to get at least one Giant Chaos Spawn finished yesterday, and the other one isn't that far behind.  To finish the other one I need to base coat all the spikes/teeth, and start highlighting the mouth, spikes, and gashes.  Pick out the pustules with Sunburst Yellow, yes... I still have it and it's thick but still good, and then dot them with white.  Then finally paint the base Steel Legion Drab with a Bleached Bone dry brush.  Not a whole lot left for that guy really. 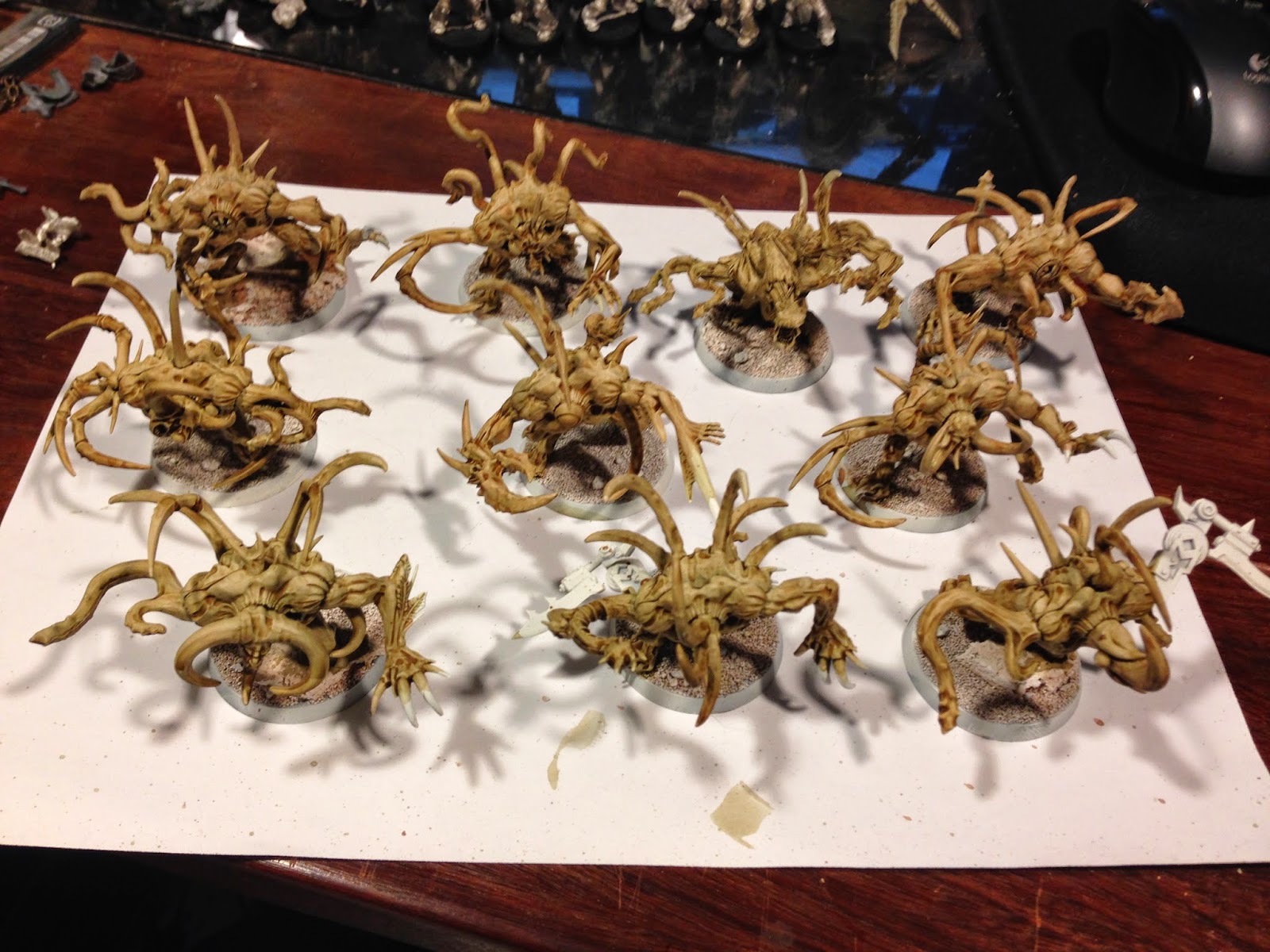 It's not easy being greenish.

Now the smaller guys I ran into a slight problem... I changed the color recipe I normally use for my Nurgle paint schemes.  I adde some Reikland Fleshshade to the wash mix, and didn't realize how strong of a color it is.  As a result, it gave a definite brown tone to the smaller Spawn.  Which kinda derailed me working on them at first, but the more I look at them the more I'm ok with it.  Since Spawn are supposed to be failed human champions of Chaos the color shift actually makes more sense to me.  So for these guys the process is a little more involved since they're still at the beginning of their paint job.  They still need Bloodletter Glaze around some of the more radical pseudopodia, then Lamenter Yellow glaze on and around the red.  Basecoat the two mechanical arms in Boltgun, wash them with Agrax, and start rusting them out.  I'll also use some of the Nurgle's Rot technical paint where the metal and flesh meet for a more infected look.

But, without further ado... the star of the show... 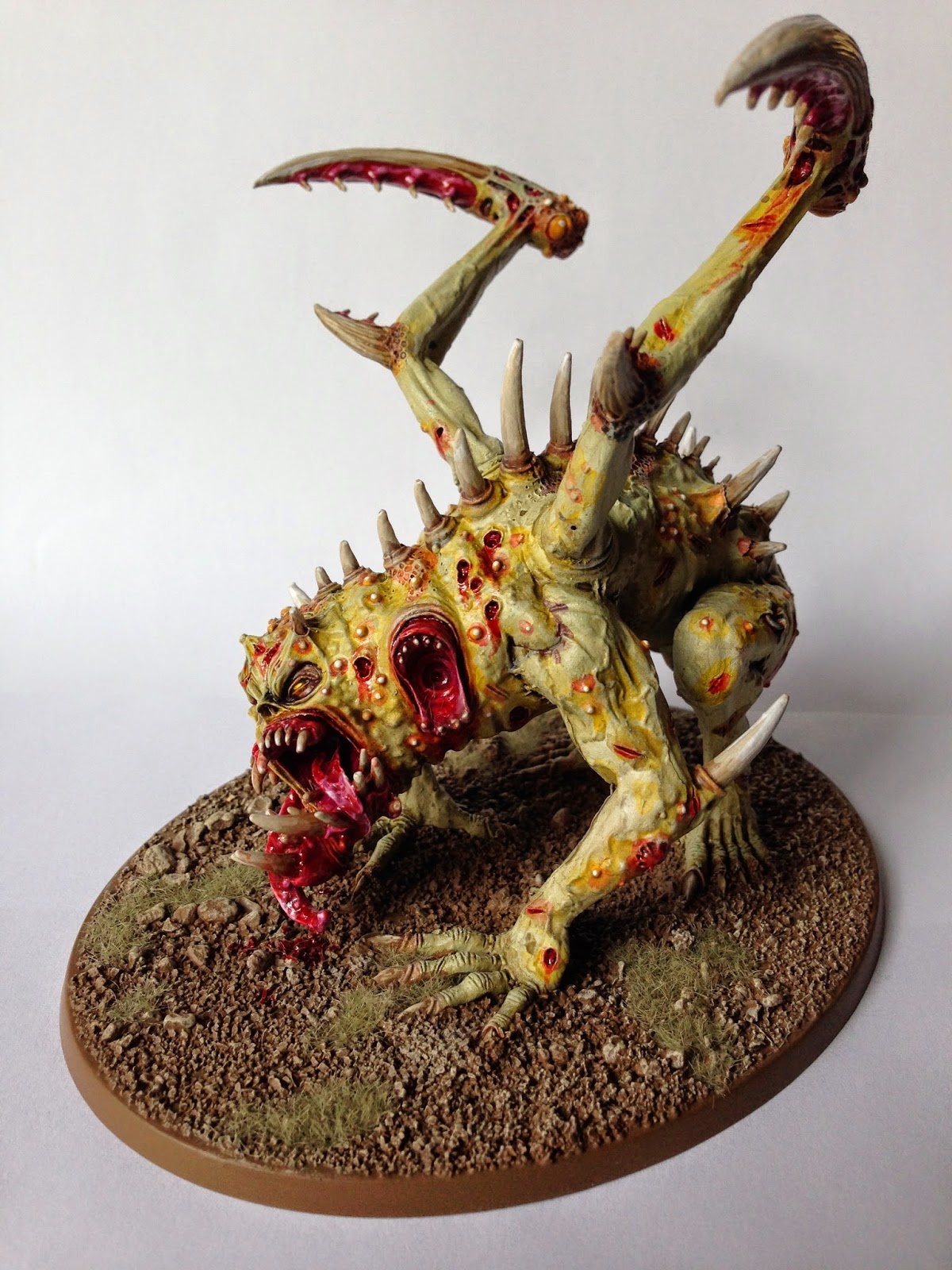 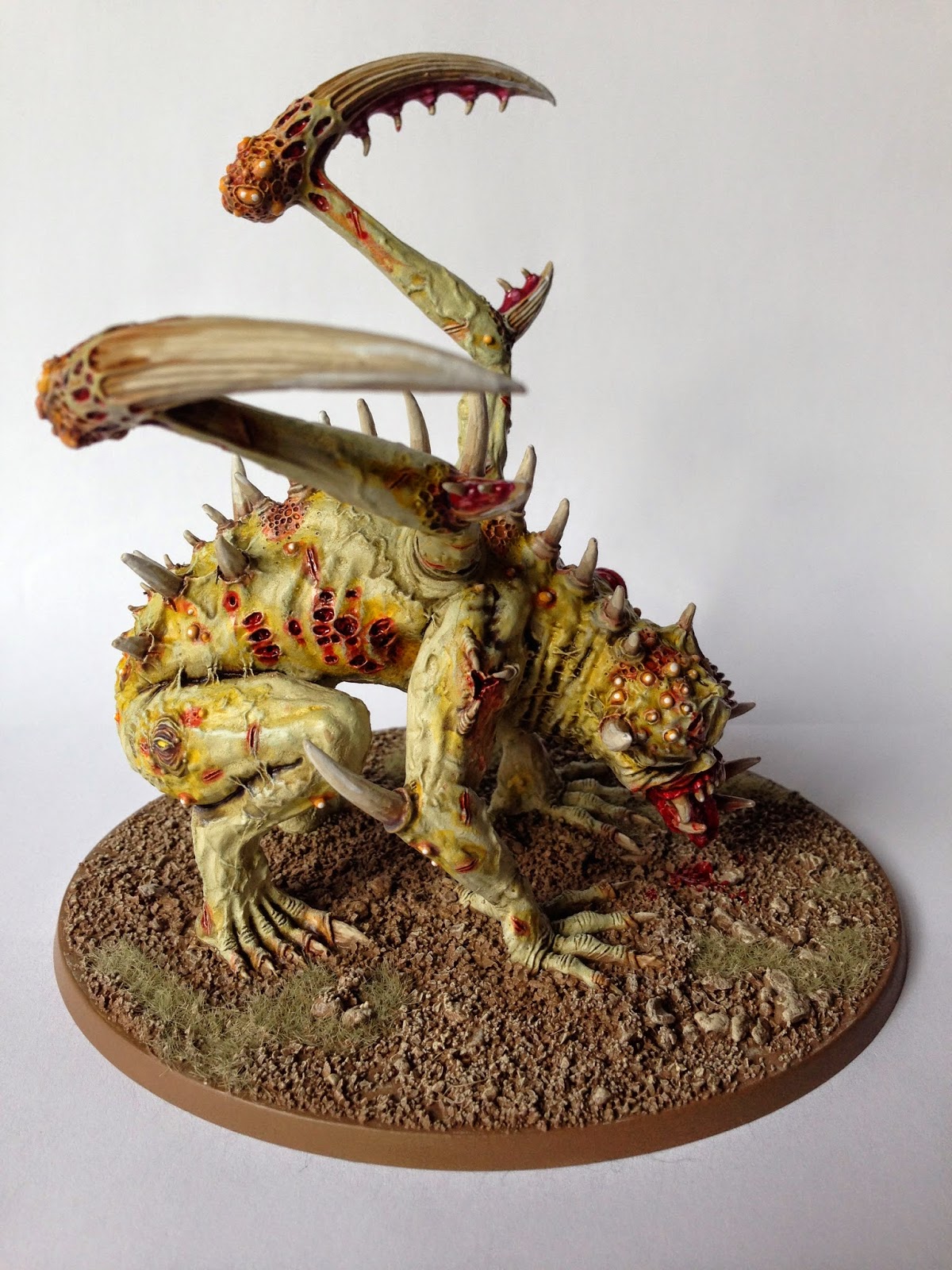 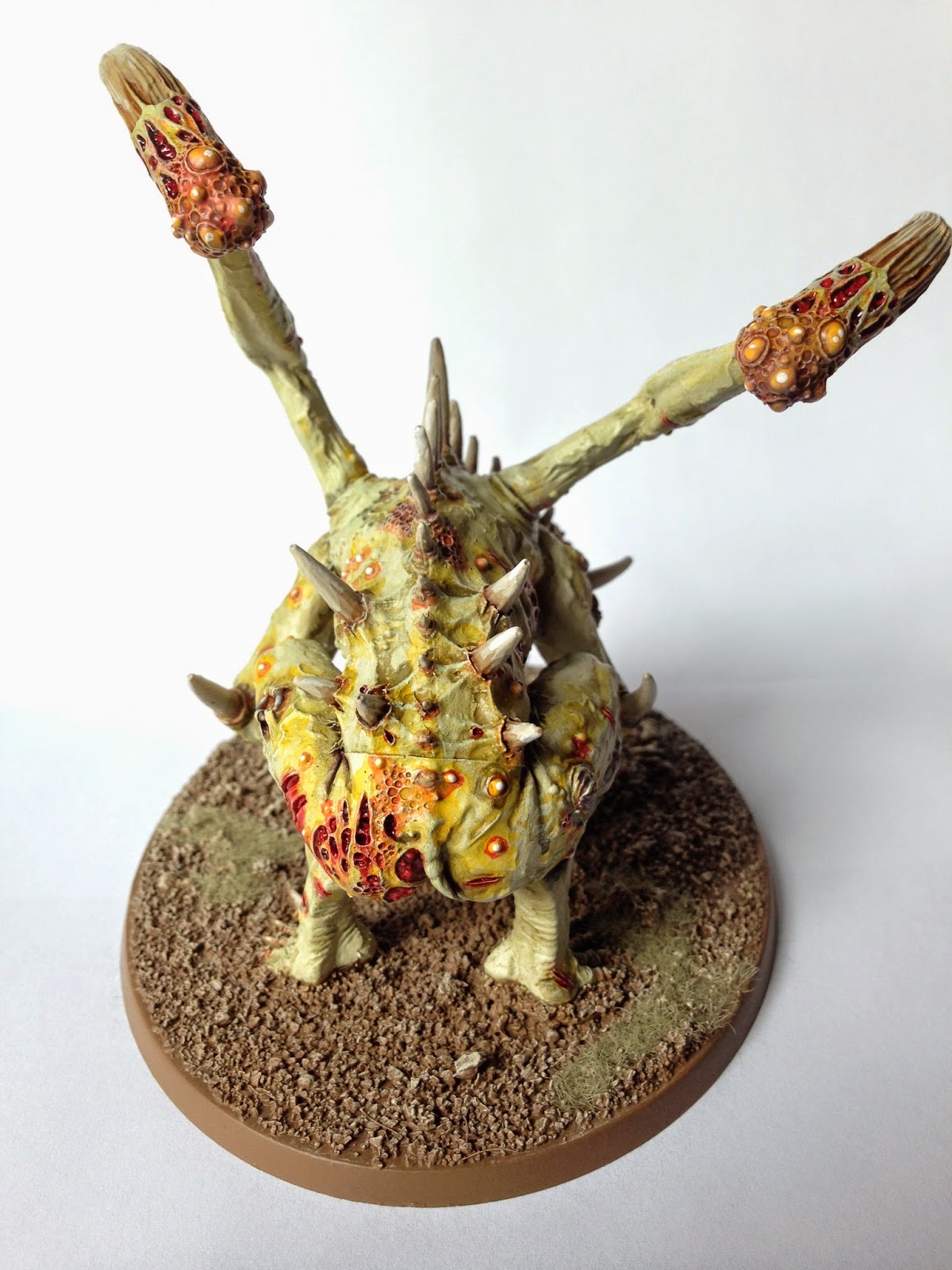 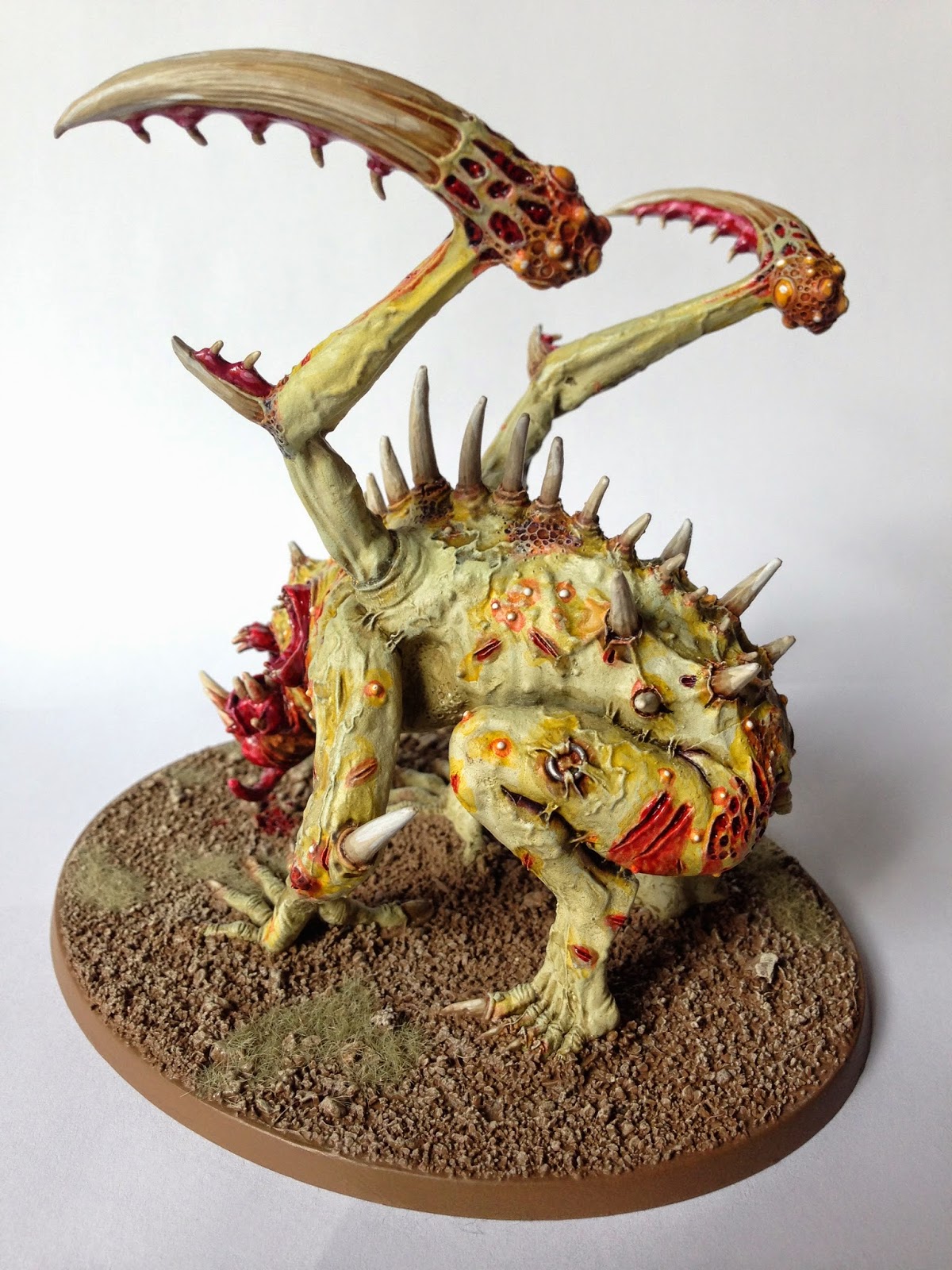 I apologize for the current angle of the camera, I need to remake my photo setup to get some better pictures, this is the best I can do at them moment.  One thing I really enjoyed about this model was using Blood for the Bloodgod.  For realistic blood effects, it worked great.  I also found if you thin it a little and put it in a deeper crevasse, or pockmark, and then lightly drag your brush downward you can get a great "weeping sore" effect from it.  Now I'm wondering if I add some Typhus Corrosion if I can get more of a "gore" effect on weapons, since the greenish tint of the Corrosion should neutralize the red of the Blood a bit and make it darker.  I'll just have to try it at some point.