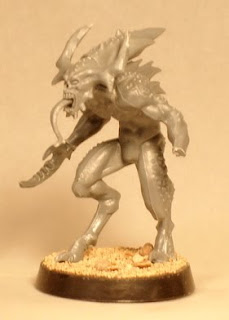 Now when the current version of the Chaos Space Marine 'Dex came out, I can honestly say I was a little bummed... about the treatment to the demons.  But, I took the opportunity to try and think of something the would be a unique generic demon.  There is no model for generic demons, and I did not want to just use boxes of Bloodletters and/or Daemonettes to use as my demons.  So why not combine them?

Take a standard Bloodletter body and head, clip the horn down to make them shorter, maybe gouge them a bit with a blade for damage.  Lop off the hands and replace them with Daemonette claws, the real pain here was to actually pin and green stuff the wrist.  I did that on the first 8, I decided to cut corners on the next 16 (yes I run 24 Lesser Demons in my list!) and now the claws on some models are popping off... as you can see from above.  The hunched over posture works well the claws, I think it is an effective but simple conversion.

But this was all for just the Lesser Demons in my Word Bearer force.  For the Greater Demon, it had to special and look like an evolutionary jump from the Lessers.  So after some thinking I came up with this... 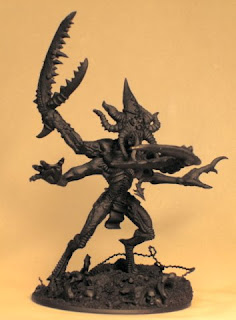 It's just a standard Keeper of Secrets model, put the claws where the hands would go and use Chaos Spawn arms for the lower limbs.  I'm really happy with the way this model turned out and can't wait to start throwing color on it.  However the really large claws may need to go, or I may just need to carefully shorten the forearms a bit and replace the huge claws with the merely large Spawn claws... haven't decided yet.  Anyone have any thoughts on this?
But this idea of ecology for my demons is not stopping with physical traits, I wanted to try and use this thought process for the colors as well.  Since the the main color for my force is red, I'm going to try and go with a contrasting color for the demons.  Now, before anyone screams Christmas Chaos!!... I'm going to use the accent blue on my Word Bearers as the main color for my demons.  This way the colors are all there and my palette doesn't shift too much.
However working larger areas of flesh will be a new painting experience for me... I can do armor, or bare arms and heads... but entire bodies are a little intimidating.  also I'll be using reference to have an idea of how these guys will look so I don't go too crazy painting them.  I think I found the perfect references.. 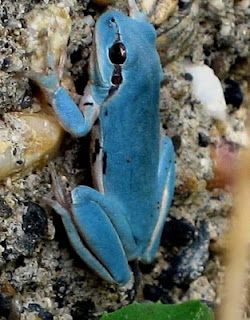 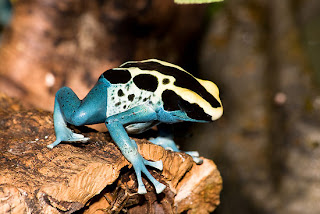 The Lesser's scheme is basic enough to be done in batches but vary each one.  The Greater's scheme can follow along the Lessers and reinforce that evolutionary feeling I'm going for.  So... too much thinking or just enough.  Do you guys take lengthy steps to make sure your force is unique on the table top?  Do you  go through and convert every model, even plain old headswaps count here.  Or is the stock model enough cause you just want to play the game more?  Lemme know what you guys think.
Take care all,
Grim
Posted by Chris at 10:59 PM
Email ThisBlogThis!Share to TwitterShare to FacebookShare to Pinterest
Labels: Conversation, WIP